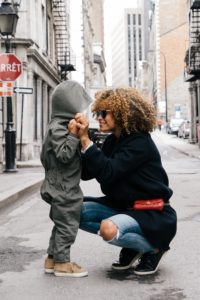 Lying is a huge trigger for most of us as parents because it was a huge trigger for our parents. So we were often yelled at, punished and/or shamed for lying. And parenting beyond our own childhood experiences is probably the most difficult task of parenting. The thing is, almost everyone lies. So creating space for it in our homes is a part of helping children learn to tell even the difficult truths, instead of the small lies we’ve all grown accustomed to telling.

Sometimes children lie because they  are trying to avoid getting in trouble. Research shows us (see example here ) that punishments inadvertently teach children to lie and be sneaky, rather than the lesson parents want to teach, such as “don’t hit” or “don’t eat junk before dinner.”

Most children explore lying at some point in their lives…and maybe several times. It is important for us as parents to explore what’s going on for them…

Sometimes we will feel completely triggered by it and fail to see the underlying reasons for the lie, other times we will know exactly what’s going on and we can talk about it, and other times we may only be able to be curious and accepting with no clear answers.

Here are some things to keep in mind if you’re noticing an abundance of lying:

Are you asking questions that invite lying?
“Did you hit your brother?”
“Did you eat that chocolate?”
“Did you clean your art supplies?”

Make Statements and Focus on solutions.
“How can you let your brother know you’re not done with the toy?”
“I see there’s chocolate on your mouth.”
“What would you like to clean up first, the paints or paint brushes?”

Be honest and curious.
That doesn’t sound like the truth. I’m wondering if you feel scared or threatened? I’ll give you some time to feel better, and we can talk about this when you’re ready.

Mistakes are learning opportunities.
Allow children to learn from their mistakes rather than punishing them. When children are able to make mistakes and try again, rather than just withstanding a punishment, they learn valuable lessons about perseverance and capabilities.

Understand how children learn and make space for their individuality – all children are discovering who they are, and when their explorations are different from what their parents want them to do they will often lie to please their parents.

Respect your children’s choice when they chose not to share information with you. When children feel we’re on their team, rather than trying to always “fix” and “change” them, they’ll share important things with us when they’re ready.

Avoid blame and shame – children lie to protect themselves from emotional pain.

Build trust and connection by focusing on your relationship with your child rather than the behavior.

“Punishing children interferes with their moral development…[because it directs] the child to the  consequences of his behavior for… himself….. The more we rely on punitive consequences, including time-out — or rewards,  including praise — the less likely children are to consider how their  actions affect other people.” -Alfie Kohn, “Punitive Damages”

Here are some additional articles on lying you’ll find helpful:

1 thought on “What To Do About Lying”